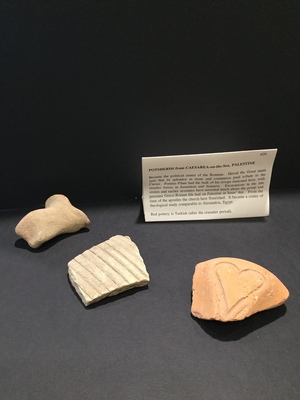 The city became the political center of the Romans. Herod the Great made sure that its splendor in stone and commerce paid tribute to the Caesar. Pontius Pilate had the bulk of his troops stationed here, with smaller forces in Jerusalem and Samaria. Excavations in the late 1960s and early 1970s have unveiled much about the pomp and pressure Greco-Roman life laid on Palestine in Jesus’s day. From the time of the apostles the church here flourished, becoming a center of theological study comparable to Alexandria, Egypt.

Red pottery is Turkish (after the crusader period).