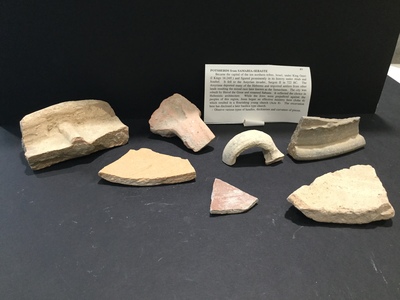 Became the capital of the ten northern tribes, Israel, under King Omri (I Kings 16:24 f.) and figured prominently in its history under Ahab and Jezebel. It fell to the Assyrian invader, Sargon II in 722 BC. The Assyrians deported many of the Hebrews and imported settlers from other lands resulting the mixed race later known as the Samaritians. The city was rebuilt by Herod the Great and renamed Sebaste. It reflected the choice in Hellensitic architecture. While the Jews were prejudiced against the peoples of this region, Jesus began an effective ministry here (John 4) which resulted in a flourishing young church (Acts 8). The excavation here has disclosed a later basilica type church.

Observe various types of handles, thickness and curvature of pieces.