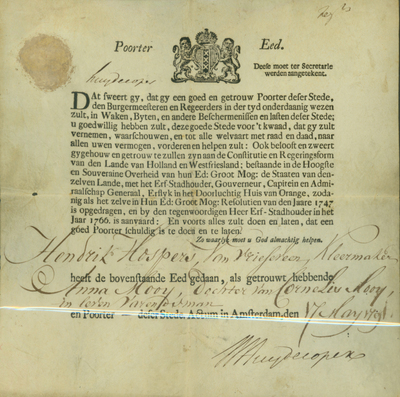 Poorter's Oath of Hendrik Hospers & Anna Mooji, the paternal grandparents of Henry Hospers. The Oath is in Dutch, but the English translation follows: Poorter's Oath Must be certified by the secretary I swear that I will be a good and faithful Poorter of this city and will be obedient ot he mayor and governor and will warn and protect this city against all crime and evil for the common good, in word and deed, with might and main to the best of my ability. And I promise to upload and support the constitution and form of government of Holland and Westfriesland--the Staaten General (legislature), the hereditary ruler, governor, capain and admiral represented by teh illustrious House of Orange, established by the resolutions of 1747 and assumed by the present ruler in 1766. And further promise to do and leave undone all that a good Poorter should do and leave undone. So help me God. Hendrik Hospers of Westfriesland, custom tailor, has sworn to the above oath. Anne Mooji (wife), daughter of Cornelius Mooji, Poorter of his city, Done in Amsterdam, May 17, 1791